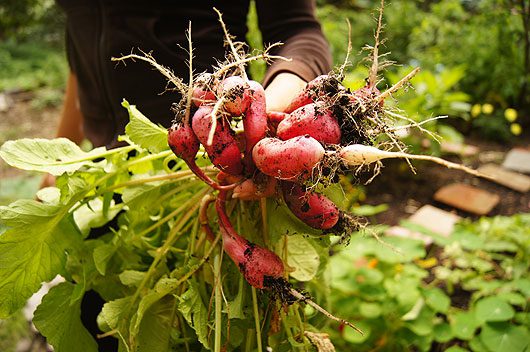 Our soil tests revealed that lead content ranged from 1300 to 1976 parts per million. Our solution was to create raised beds using materials that we already had on-site or could easily source locally. We constructed the perimeter of the beds using cinder blocks (left over from Dojo construction) and reinforced with scrap iron (left behind on the old shed). We created a 3-4 inch layer of gravel to serve as a water-permeable barrier between the new soil and the contaminated ground. We then brought in 40 yards of locally sourced compost, leaf mulch and loam to fill the four raised beds.

We partnered with two local permaculture gardeners to design beds that would best address the challenge of limited sunshine due to tree cover. The four beds are each quite unique and contoured to optimize sun exposure. Three of the beds are cultivated by us; the fourth was offered to neighbors as a community plot.

For our three beds, we took a permaculture approach, attempting to harness nature’s intelligence in designing adaptive ecologies that require minimum human intervention. That means we placed elements where they are best positioned to interact with each other—like planting marigolds and tomatoes to optimize pest control and using leaf mulch to reduce evaporation and control weeds.

We’ve primarily focused on crops that can tolerate cooler temperatures and shade, such as kale, chard, mustard greens, lettuces, scallions, carrots, radishes and herbs. The beds with the highest sun exposure have tomatoes, melons, cucumbers and peppers.

Finally, we’ve dedicated the southeast corner of the yard to a composting station, where we’re running tumblers for food waste and turning a large brush pile. At some point in the future, we anticipate being able to produce our own compost for the gardens, rather than sourcing from outside our site.